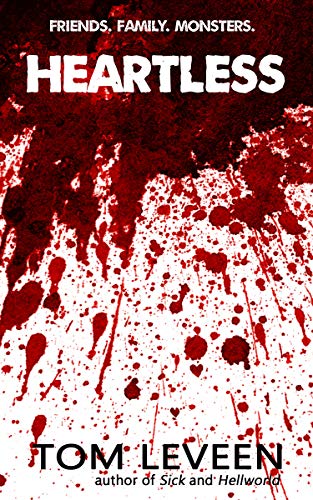 Urban legends of a murderous figure called Springheel Jack date back to the 19th century. What Baylee is about to learn is that “he” is most certainly for real…and not alone. When her only living relative—her older brother—becomes one of the bloodthirsty creatures, Baylee’s sole chance to turn him back rests with the only people inclined to believe her story: her brother’s nerdy RPG gamer friends.

I continue working through my local authors with Heartless by Tom Leveen. This did present some challenge for me as it is currently only available in e-book and I am still very much a physical copy reader most of the time. That said, I did enjoy this story quite a bit. The characters feel authentic and as a gamer I got a particular kick out of familiar game terms especially from less well known games. I cringed inwardly at one scene involving the destruction of numerous books. The atmosphere builds well and leads to a satisfying conclusion.

The only small issue I had was that there were a few spelling/proofreading errors that temporarily threw me out of the story. Aside from that, I do highly recommend this fun and thrilling read.