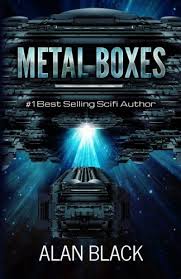 Coming of age can be hard for anyone. But for Blackmon Perry Stone it is life threatening. At 15, he barely manages to graduate from the empire’s cadet training by a talent for unusual problem solving. He has trouble settling into navy life, but life becomes harder when he uncovers a ring of thieves aboard the huge ship. Life becomes difficult when they killed him. Stone is ejected into hyperspace in an escape pod without hyperspace engines. Fully expecting to die, he reconfigures the sub-light engine to escape the inescapable. To his surprise it works, but only well enough to do little more than crash on an uncharted planet. It will surprise him if he can make the engine work again, but not as much as it will surprise everyone else if he can come back from the dead.

In my continuing journey through the books of local AZ authors I finally make it to one of my most supportive, Alan Black. Alan often said he never met a story he didn’t want to tell and proved quite prolific before losing his battle with cancer. Sadly I was so used to seeing him multiple times a year I figured I had time to pick up his books at an event and have him scribble his name in them for me. The year I planned to grab this series to add to my reading list in May proved to be the one in which we lost him in January. His lovely wife Duann carries on his legacy not only making his books available at a number of events through out the year, but also continuing the stories he started. Though I only got a few years to call Alan a friend I was interested in many of his stories. I decided that I wanted to check out Metal Boxes specifically because it was a series and I wanted to be able to continue with characters I felt I would come to love. Thus it was with a bit of trepidation that I started out reading Metal Boxes and found that it took me a little longer to get that solid hook.

Thankfully before I was willing to write it off as just not for me, I felt the hook sink in and was quickly pushing to read just a little more to see what happened next. This is a self published gem so lacks some of the punch that I feel it deserves. A minor thing, but simple standard size simple chapter numbers at the top of the page left me feeling the story deserved more than I was seeing to match what the story evoked. All in all a fun read and something I’m very glad to have finally jumped into. I look forward to reading the rest of the books in the series and seeing what Mr Stone and his friends get up to next. A book I can happily recommend to Sci-Fi space adventure fans.

For those of you following along on my local author review tour, next up is H.A.L.F.: The Deep Beneath by Natalie Wright

Until next time. See you among the Stacks.