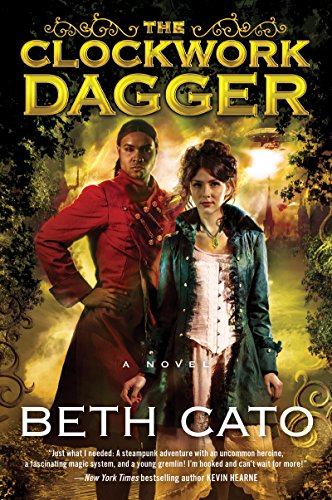 Full of magic, mystery, and romance, an enchanting steampunk fantasy debut in the bestselling vein of Trudi Canavan and Gail Carriger.

Orphaned as a child, Octavia Leander was doomed to grow up on the streets until Miss Percival saved her and taught her to become a medician. Gifted with incredible powers, the young healer is about to embark on her first mission, visiting suffering cities in the far reaches of the war-scarred realm. But the airship on which she is traveling is plagued by a series of strange and disturbing occurrences, including murder, and Octavia herself is threatened.

Suddenly, she is caught up in a flurry of intrigue: the dashingly attractive steward may be one of the infamous Clockwork Daggers—the Queen’s spies and assassins—and her cabin-mate harbors disturbing secrets. But the danger is only beginning, for Octavia discovers that the deadly conspiracy aboard the airship may reach the crown itself.

I must admit that I do struggle with being impartial when it comes to people I know or admire. I’ve been aware of Beth Cato as a local author for a few years and even lucky enough to listen to her speak about writing on panels at local events. When she was recently invited to be the local Author Guest of Honor at the 1st ever CoKoCon, I decided it was past time that I should read her books and made sure to set aside copies for myself.

Right away I was reminded how much I love the idea of Steampunk mixed with magic. Octavia is a simple Medician, a healer versed in not only the basic art of doctoring, but also a very gifted magical healer using the power of The Lady a legendary magical tree that allows Medicians to perform miraculous deeds of healing.

While not the helpless damsel in distress always needing the gallant knight to rescue her, neither is Octavia the amazing well trained heroine capable of defeating everyone who comes after her without breaking a sweat. She meets several people who are clearly more than they initially appear both good and bad. I was pleasantly drawn into the story and while I guessed at some of outcomes it was a feeling of triumph at picking up the clues and foreshadowing by the author rather than a predictability of the story and writing.

The story proceeds at a good pace that kept me reading with a point around the last third that created a wonderful sense of urgency to finish the book. The descriptions are rich and help to bring the world to life without being overly wordy or cumbersome. While I felt that the book itself has a complete enough story to stand on its own, there is plenty of mystery sprinkled throughout and left unanswered at the end to draw me quickly to the second book to complete the story. A wonderful read and one I am more than happy to recommend to Steampunk and Fantasy lovers.

Next week I will be sharing my thoughts on the conclusion of the story in The Clockwork Crown. Until then, See you among the stacks.