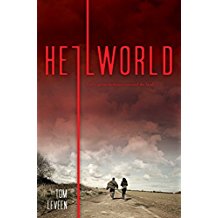 Five years ago, Abby Booth’s mom, cohost of a ghost-hunting reality show, went missing while filming in a “haunted” cave in Arizona.

Since then, Abby’s life has all but fallen to pieces, most notably because of her dad’s deep depression and how they’ve drifted further and further apart.

But now, at sixteen, Abby has decided that things will change. She plans to go to the same cave where her mom and the crew went missing and to find out, once and for all, what happened there.

With the help of the cohost’s son Charlie, and two of his friends, Abby sets off on a quest for answers…but when the group ends up finding, what they stumble across in that dark, primordial cave in Arizona, is nothing they could have ever imaged.

Right from the start Hellworld proves to be different from most books I read. Chapter 1 opens with Abby and her friends in the dark in the cave after some horrific event has befallen them in first person present tense. We follow Abby and her friends as they seek to make their way out of the cave. Chapter 2 takes us back to before their adventure had begun and begins to show us what led to the opening in past tense. Each chapter moves back and forth between the present tense movements of Abby and friends and the events leading up to what happened to them in the cave. It was a well written and enjoyable read. The ending does seem to rush a little in comparison to the rest of the story but not so much as to take away from the overall enjoyment. I look forward to reading more from Tom Leveen.

Until next time, See you among the stacks.