Book Review: The Year of Lightning by Ryan Dalton. 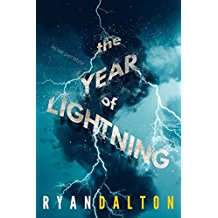 When 15-year-old twins Malcolm and Valentine Gilbert moved to a new town, they never imagined that the old house across the street could bring them so much trouble. Inside the old house, a secret machine with the power to pierce time has reawakened. Meanwhile, lightning storms are breaking out all over town. They’re getting worse every week, and seem to enjoy striking kids who just want to pass science class and mind their own business. When Malcolm and Valentine discover a connection between the house and the storms, their situation goes from mysterious to crazy-stupid dangerous. Someone is controlling the great machine, and their purpose is nearly complete. In a race against time, the twins must uncover the chilling plan, the mastermind behind it, and the force that’s driving the deadly storms. They’ll hunt a powerful enemy that threatens their town’s existence, and the only clues are written in the sky.

Time again to talk about a book by a former local author, this time The Year of Lightning by Ryan Dalton. I’ll admit a small amount of bias when starting out reading one of these authors for the first time. I want to like their books and say wonderful things about them. Like any other book, I choose the ones that sound like they will be of interest to me. I either have copies on hand that I am selling or have purchased to show my support for those who have shown support for my little business. This was an easy choice since I also love a good time travel story.

This proved to be no burden at all as it was indeed a great story involving time travel. There were as promised numerous twists and turns that while I guessed at some from the clues provided were not obvious. As with other YA books I’ve read and enjoyed, Dalton captures well what I remember of being the age of his protagonists and nothing seems forced or out of place. A wonderful complete story on its own, with just enough at the end to set up for the next book.

A limited number of signed copies of the complete trilogy are available for purchase from the store. E-books are available at: https://duncansbooksandmore.mymustreads.com/ebook/all

Reviews of The Black Tempest and The Genesis Flame will be coming.

Until next time, see you among the stacks.

3 thoughts on “Book Review: The Year of Lightning by Ryan Dalton.”