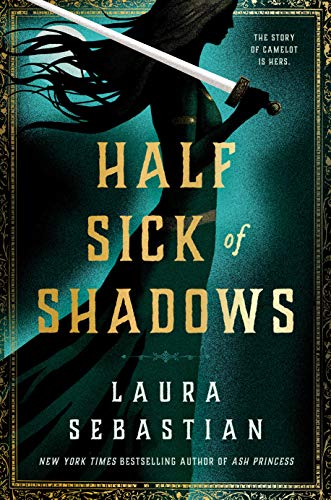 Everyone knows the legend. Of Arthur, destined to be a king. Of the beautiful Guinevere, who will betray him with his most loyal knight, Lancelot. Of the bitter sorceress, Morgana, who will turn against them all. But Elaine alone carries the burden of knowing what is to come–for Elaine of Shalott is cursed to see the future.

On the mystical isle of Avalon, Elaine runs free and learns of the ancient prophecies surrounding her and her friends–countless possibilities, almost all of them tragic.

When their future comes to claim them, Elaine, Guinevere, Lancelot, and Morgana accompany Arthur to take his throne in stifling Camelot, where magic is outlawed, the rules of society chain them, and enemies are everywhere. Yet the most dangerous threats may come from within their own circle.

As visions are fulfilled and an inevitable fate closes in, Elaine must decide how far she will go to change destiny–and what she is willing to sacrifice along the way.

I am an aficionado of Arthurian legend. I’ve read many versions of the story through the years but this was genuinely a creative and different version, focused on Elaine of Shalott, someone who is typically considered a minor character in the tales of Arthur. In “Half Sick of Shadows”, Laura Sebastian has re-focused the entire legend around Elaine and that is absolutely brilliant.

Not only are all the characters, from Arthur to Guinevere, to Lancelot and Morgana, and Elaine herself, all three dimensional, less than perfect and flawed characters, but they feel like real people rather than the stuff of legends. Each of them has their motivations, their abilities, and they all fit into the story in beautiful and amazing ways, ways that change the typical legend that we know. Laura Sebastian has rewritten destiny, creating a new dynamic and a story that readers won’t be able to get enough of.

Elaine’s abilities give Laura a way to weave different possibilities throughout the novel but also allows her to weave in snippets of the past events in the character’s lives in a realistic fashion without bogging down the main narrative. It allows the reader to see bits of possible futures, including what Elaine is able to do with her abilities to reweave her destiny along with her friends. It is compelling and it is engaging. It is brilliant.

If you love Arthurian legend and are interested in the female perspective, this is the novel for you. It is well thought out, it is creative, and it is unique. The characters are intriguing and the story is emotional. The character arches are powerful and the twist at the ending makes me want to not only reread the novel time and again but also want more of the world. It is a wonderful version of the legend.