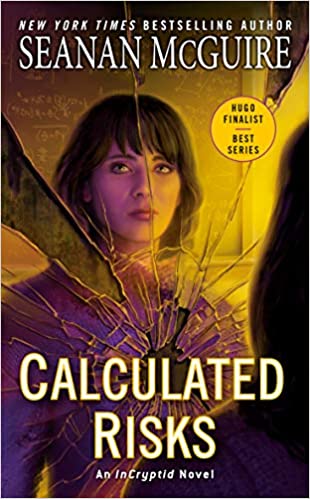 The tenth book in the fast-paced InCryptid urban fantasy series returns to the mishaps of the Price family, eccentric cryptozoologists who safeguard the world of magical creatures living in secret among humans.

Just when Sarah Zellaby, adopted Price cousin and telepathic ambush predator, thought that things couldn’t get worse, she’s had to go and prove herself wrong. After being kidnapped and manipulated by her birth family, she has undergone a transformation called an instar, reaching back to her Apocritic origins to metamorphize. While externally the same, she is internally much more powerful, and much more difficult to control.

Even by herself. After years of denial, the fact that she will always be a cuckoo has become impossible to deny.

Now stranded in another dimension with a handful of allies who seem to have no idea who she is–including her cousin Annie and her maybe-boyfriend Artie, both of whom have forgotten their relationship–and a bunch of cuckoos with good reason to want her dead, Sarah must figure out not only how to contend with her situation, but with the new realities of her future. What is she now? Who is she now? Is that person someone she can live with?

And when all is said and done, will she be able to get the people she loves, whether or not they’ve forgotten her, safely home?

Seanan McGuire managed the impossible. The previous novel, “Imaginary Numbers”, ends in a cliffhanger and I don’t mind because it is just that good a book. And with every novel in the Incryptid series, she gets better and better. In “Calculated Risks”, she catapults her readers right into the middle of the action. The characters are in a strange dimension, with no way home that they know of and none of Sarah’s family even knows who she is. Despite that less than advantageous beginning, with the odds stacked against a satisfying ending, Seanan McGuire creates a plot that kept me on my toes, reading into the wee hours of the morning, and desperately captivated with the fate of the Price family, especially Sarah and Artie.

Beat for beat, while I have loved all of Seanan’s books, this one in particular, kept me enraptured. I think because the characters are in such a difficult situation, one in which it is difficult to envision an escape, it makes the stakes so high and creates a story that keeps readers guessing until the end if there will be a satisfying ending.

The plight of Sarah, her grief over the loss of her family, that they’ve forgotten her, also creates a story that is deeply emotional. Everyone faces loss of some kind over their lives and Sarah’s loss creates a bond between the character and the reader. Seanan brilliantly taps into that theme of family and loss with this novel.

The solutions that Sarah discovers and the friends that she makes along the way, creates a novel that is complex, layered with emotion and a joy to read. And while it helps to have read the previous novel, “Imaginary Numbers”, especially given the beginning of the book, Seanan McGuire also does an excellent job of summarizing the events of the previous book. She always does so with great skill, providing the information in bits and pieces by the characters so that readers are not lost if they just picked up the book for some reason.

Emotional and brilliant, I highly recommend, “Calculated Risks”. It’s good if you have read the previous books in the series so if you haven’t begun, The Incryptid series are quick and fun reads. And it is worth reading the rest for the brilliant and satisfying ending to “Calculated Risks.”

Rating: 5 out of 5 calculations

As a approved distributor of Penguin Random House, Duncansbooksandmore can order copies of all Seanan McGuire’s books.