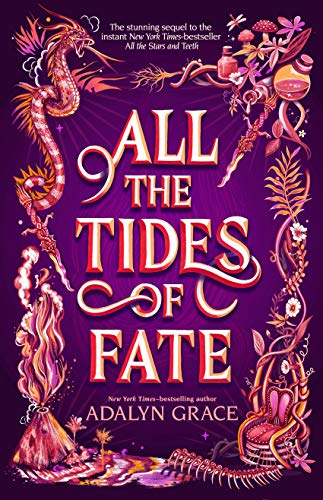 Through blood and sacrifice, Amora Montara has conquered a rebellion and taken her rightful place as queen of Visidia. Now, with the islands in turmoil and the people questioning her authority, Amora cannot allow anyone to see her weaknesses.

To save herself and Visidia, Amora embarks on a desperate quest for a mythical artifact that could fix everything—but it comes at a terrible cost. As she tries to balance her loyalty to her people, her crew, and the desires of her heart, Amora will soon discover that the power to rule might destroy her.

As the sequel to All the Stars and Teeth, this second novel in the duology is everything one could hope for and completely wraps up the story and relationships begun in the first book. In the first, we were introduced to the characters and the situations but in the second, we deal with the consequences and the turmoil of Amora taking up the crown. While Amora is doing her best to save Visidia and help all her people, she is afraid to allow anyone in, to allow anyone to see her weaknesses. When she learns about a possible artifact that could fix her problems, she fails to see that it could come with a terrible cost. Along the way, she encounters treason, questioning, doubts, and crippling nightmares. And if she can recover the artifact, she must decide if the cost is worth the risk to her and to her people. She must learn the lessons of allowing love in and letting grief go.

What I feel makes this story so compelling is the complexity of the characters and the depth of emotion that the author is able to explore. There are some dense emotions that are explored in this novel and the author does so well. Amora has lost her father, she’s lost her magic, and she is reeling from those twin events. Despite her trying to appear confident, she is having nightmares, struggling with carrying on, and the way those emotions are conveyed, as she pushes people away instead of accepting help, kept me as a reader on the edge of my seat. Ultimately, the story is not about Amora finding an artifact to help her out of a situation but about her accepting love, accepting help, and finding a way to move forward that allows herself and her people to be who they are meant to be.

While I found the story compelling, one of the small problems I had was that the story is written in present tense. Most stories are written in past tense. While that allowed every situation to be immediate and intense, the point of view in first person granting us a more intimate view of the character, I truly struggled with the tense as I am not used to reading present tense. To me, that is more of my own problem, though. The author’s reasons for using that technique showed in the intensity of the story and the actions. So while you might not be familiar with present tense stories, let me assure you that if you take the time, the story is well worth it and it adds to the experience.

There are zero flaws I could find. The plot perfectly ties up the dangling threads from the first book and the characters bring such emotion to the pages. The ending is emotional and ends the two story volume perfectly.