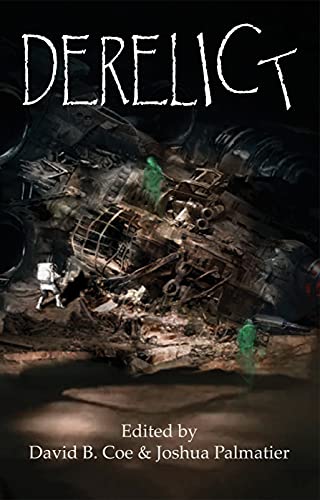 A ship lost with all hands on icy Titan. A dying woman’s soul linked with the fate of an interstellar vessel. A wrecked ferry possessed by the ruin-demon who grounded her. A haunted space cruiser of legend again terrorizing those who travel among the stars. A pirate-ravaged frigate concealing magical secrets that can doom the wicked, or redeem the worthy. An inexplicably empty cruiser arriving at a space station amid the panic of a system-wide pandemic.

There is an allure to the ghost ship, the once-proud voyaging craft now abandoned to the void of space or the depths of the sea. In Derelict, speculative fiction authors Kristine Smith, D.B. Jackson, Griffin Ayaz Tyree, Andrija Popovic, Sharon Lee & Steve Miller, Gerald Brandt, Kit Harding, Gini Koch, Jacey Bedford, Mark D. Jacobsen, Jana Paniccia, Alex Bledsoe, Chaz Brenchley, R.Z. Held, Jack Campbell, and Julie E. Czerneda offer their tales of the lost vessel. So climb aboard if you dare, and prepare for a reading adventure that will unnerve and inspire and transport you beyond distant horizons.

Every year Zombies Need Brains publishes these anthologies and every year they go above expectations. With a mix of seasoned authors and new submissions accepted, the offerings are incredible. Each story creates connections to characters and resonates with the theme of the anthology, derelicts that are both haunting and compelling. Right from the first story Symbiote to the last, Decay in Five Stages, each story is enthralling and captures the imagination.

One of the stories I especially enjoyed was The Wreck by D.B. Jackson with the historical element of slavery and an ending that unexpected. Gini Koch’s story Saving Sallie Ruth was hopeful and engaging. The Tempest in Space by Griffin Ayaz Tyree was both beautiful and heartbreaking. Every story in the anthology had characters that pull you in, are compelling, and make you stay up late at night until you’ve read every one of the stories in the anthology.

One of the best parts of an anthology is that you get to read from authors that are new to you and get to sample their styles. Based on this, I would read all of these authors and look forward to the rest of the anthologies from Zombies Need Brains. If you like solid science fiction and stories about the wrecks both in space and in the ocean, this is worth checking out.