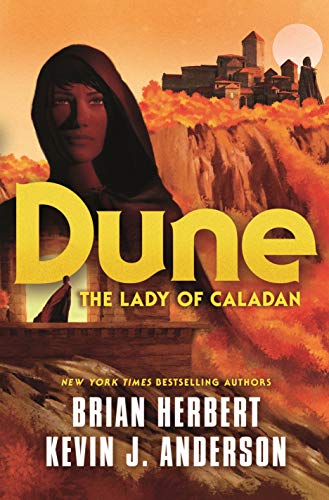 From Brian Herbert and Kevin J. Anderson, Dune: The Lady of Caladan is a brand new novel in the internationally bestselling Dune series.

Lady Jessica, mother of Paul, and consort to Leto Atreides. The choices she made shaped an empire, but first the Lady of Caladan must reckon with her own betrayal of the Bene Gesserit. She has already betrayed her ancient order, but now she must decide if her loyalty to the Sisterhood is more important than the love of her own family.

Meanwhile, events in the greater empire are accelerating beyond the control of even the Reverend Mother, and Lady Jessica’s family is on a collision course with destiny.

Weaving a novel in a series is never an easy undertaking but both Brian Herbert and Kevin J. Anderson has done so with a skilled hand, blending in the intrigues, the manipulations, and the political underpinnings that we read in the original Dune series by Frank Herbert. They have captured the heart and soul of what made Dune a fantastic story for readers. But they’d already proven that with the other books they’ve written together. What they’ve done with this novel is to not only give us more narrative about Leto, Jessica, the Bene Gesserit, and Caladan but they have extended that story into the second novel seamlessly. This middle books introduces the conflicts of Leto, Jessica, Paul and others while still dropping in all the information you need to not miss a beat from the first novel.

The characters are much as I remember from the original Dune book and I loved that as a fan of the book. Jessica shines in this book. Her and Leto are my favorites as well as Paul. What the novel does well is explain much of Jessica’s motivations and Leto’s, their actions that inform both their destinies and the Empire’s. You see the glimmerings of who Paul is meant to become and the dangers that the Bene Gesserit see in him and Jessica. You see the dangers and conflicts that are leading to the next chapter in all their fates. The way the authors tie all those threads together is brilliantly done.

My only little conflict is I was hoping for more from Jessica. The synopsis from the publisher makes you feel like you will get more of her point of view. While we got much of her in this novel, it is combined with many points of view to tell the narrative. I would love to have a novel that focuses just on Lady Jessica. However, that wish did not detract from an intriguing story with many threads that will no doubt be resolved in book three. For fans of Dune, this will be an enjoyable read and well worth buying.