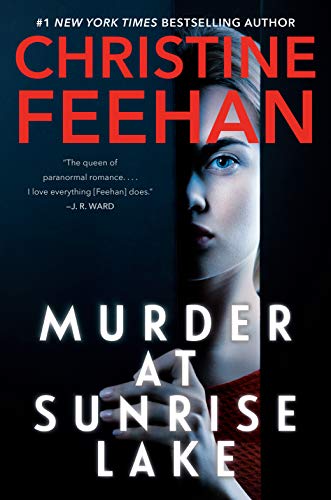 #1 New York Times bestselling author Christine Feehan reaches new heights of passion and suspense in this thrilling novel that takes readers deep into the California backcountry, where a woman is tormented by visions of a killer.

It starts in her dreams. Hideous flashes from a nightmare only she can stop. Images of a murderer stalking the ones she cares about most…

Stella Harrison thought she got away from the traumas of her past. Running the Sunrise Lake resort high in the Sierra Nevada mountains has brought her peace, even though she doesn’t truly share her quiet life with anyone. Not even Sam, the hired handyman that notices everything and always seems to know exactly what she needs.

Stella doesn’t know anything about Sam’s past, but somehow over the last two years his slow, steady presence has slipped past her defenses. Still, she knows she can’t tell him about her recent premonitions. So far there’s been no murder. No body. No way to prove what’s about to happen without destroying the life she’s built for herself.

But a killer is out there. And Stella knows that this time she’ll do whatever it takes to stop him.

Christine Feehan is an author that I’ve heard her name and have wanted to read for a long time, so I was excited for the opportunity to read this stand alone novel.  I love suspense, romance and combining the two is always a pleasure read for me. In this, I found both of those elements were well written, the suspense reels you in and the relationship is subtly powerful in the dynamic between the couple.

For the suspense elements, I found the plot quite believable dealing with a murderer that is difficult to track or even determine that he is killing. I personally found the paranormal elements well written, Stella’s precognitive dreams leading her into a desire to find the murderer and stop him. The dreams work well, especially both the limits and structure. It adds an intriguing element to the mystery, a different way for the protagonist to hunt the killer. I also love that Stella struggles with the dreams, the trauma and brutality of them. While I did determine the killer soon in the novel, Christine Feehan does work hard to disguise the killer and red herrings will likely prevent others from easily figuring out the mystery.

The main characters, Stella and Sam, are intriguing. I like that neither is perfect, they are flawed, have gone through struggles and come together in a powerful chemistry that does flow   off the page. The relationship and dialogue between them is authentic and believable. The emotions between them pull me into the story and make me want to reach the end to find out if they both survive.

One of the key elements I love is Christine Feehan’s dialogue. Her dialogue flows off the page, it is natural, real and feels like real people trying to solve a real problem. These characters display fear, worry, and react the same way I believe most of us would behave in similar situations. On a side note, she also has the character’s pets, dogs and cat, who are integral to the story. Not only are they a key element to the plot but also help the characters feel like real people. There are very few authors who think to include pets into a story so I especially appreciated this aspect.

One of the elements that didn’t work for me was those same secondary characters. All of them were described as the best at what they did and that did not feel believable which did bring me out of the story on multiple occasions. In addition, the author uses the main character’s thoughts to provide those descriptions and information. While I’ve seen this done before, in this novel, there was just too much information provided at one time. Ultimately, it ended up being a lot of infodump, far more tell than show, especially at the beginning of the novel. One of the reasons that doesn’t work is that we get a lot of information about the secondary characters and their backstories, which makes it feel like the author is setting up a series but also adds a lot of threads that aren’t critical or needed to the main storyline. While some of it is interesting, it just wasn’t necessary.

In the final equation, I did enjoy the novel despite the extra amounts of information. The conclusion is satisfactory and brings together all the elements of the novel. The characters in the novel are engaging and warm. The paranormal aspects bring extra intrigue to the suspense elements and actually help tie the plot together. The romance is beautiful, real with the sex scenes being just enough spice for most readers. If you are a fan of Christine Feehan and familiar with her writing, you will likely love these characters and “Murder at Sunrise Lake.”