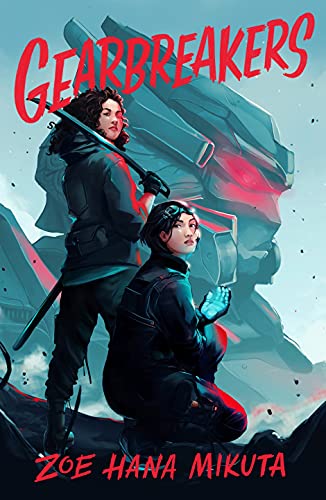 Two girls on opposite sides of a war discover they’re fighting for a common purpose―and falling for each other―in Zoe Hana Mikuta’s high-octane debut Gearbreakers.

We went past praying to deities and started to build them instead...

The shadow of Godolia’s tyrannical rule is spreading, aided by their giant mechanized weapons known as Windups. War and oppression are everyday constants for the people of the Badlands, who live under the thumb of their cruel Godolia overlords.

Eris Shindanai is a Gearbreaker, a brash young rebel who specializes in taking down Windups from the inside. When one of her missions goes awry and she finds herself in a Godolia prison, Eris meets Sona Steelcrest, a cybernetically enhanced Windup pilot. At first Eris sees Sona as her mortal enemy, but Sona has a secret: She has intentionally infiltrated the Windup program to destroy Godolia from within.

As the clock ticks down to their deadliest mission yet, a direct attack to end Godolia’s reign once and for all, Eris and Sona grow closer―as comrades, friends, and perhaps something more…

“Gearbreakers” is both glorious and heartbreaking. Zoe Hana Mikuta’s debut novel illustrates exactly why we need more authentic voices in fiction and how marvelously well it can be done. But it also made me cry, both from the beauty and the ending of the novel. But everyone should read this brilliant steampunk, giant robots and queer romance because it is emotional, adrenaline filled and intense.

Even for a debut novel, the plot is compelling. The point of view is split between the two main protagonists but that doesn’t detract from the intensity but only increases it. It also provides insight into each character, into their emotions and reactions to the events in the novel. Both characters are likeable, interesting and full of complexity. Eris is both fiery, rebellious, but full of love for her crew, for her people, and wants to take down Gondolia one robot at a time. Sona is torn, her loyalties with the Gearbreakers but she’s made choices she can’t take back, been transformed but her emotions haven’t been stripped from her and she still has choices left. Both are engaging and bring a fire that many novels lack.

The action is equal to the characters that Zoe Hana Makuta has written. Giant robots, life and death battles, where individuals attempt to take on robots that could pulverize them. Even with the best technology, the Gearbreakers have little chance against the Windups but their battle provides hope to those still fighting Gondolia. The question is can they stand a chance in the war, even if they win individual battles and do Sona or Eris stand a chance with each other? The ending is mesmerizing, made me cry with the intensity of it all, and I really don’t want to wait for the next book. I don’t want to spoil anything but this book is incredibly good and is not to be missed.