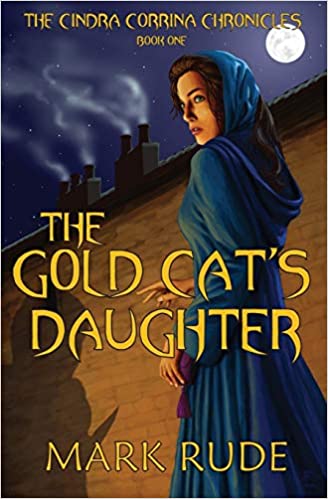 Calilon is on the brink of civil war and a marriage alliance is the key to stability. That duty falls to young Lady Cindra Corrina, a girl of restless spirit who receives a rather unpleasant surprise regarding her future husband. Distraught and defiant, she slips from the castle to explore the city of Portshia, hoping for an adventure before her looming marriage. She gets more than she bargained for. Dark magic and hidden forces are moving the kingdom to war, and all hope centers on Lady Cindra’s wedding day, a day she desperately wants to avoid…

Mark Rude is a local author and I’ve had his book on my to be read list for quite some time. I’m grateful that I finally found the time to read it. His story is incredibly riveting, the characters engaging, and the plot makes you want to read the rest of the series.

In The Gold Cat’s Daughter, Mark Rude has created a fantasy world that despite being based in a traditional fantasy setting is still compelling. One of the biggest reasons why is the main character, Cindra Corrina, a young teenage girl who is on the brink of being married to someone she doesn’t want to be married to. As a first novel in a series, Mark sets up the world well, providing details of the politics and religion while also introducing Cindra, allowing the reader to get to know her and her problems, which includes dark magic and hidden forces.

The action and pacing are at the right level, giving the reader time to get to know the characters and the world. I found the action engaging with a great mix of personal and political drama, along with some explanation of the world. What slowed down the action at times were the transitions in point of view. While Cindra is the main character, the story switches between several other points of view to allow the reader time to understand the world and to get other perspectives. But those transitions come so suddenly and unexpectedly without warning that they disrupt the action and the story. Better transitions and fewer of them would allow the story to flow even better.

What makes the story so engaging is Cindra and how well she is written. She comes through as authentic and realistic. I found her believable as a teenage girl, with all the dreams and aspirations, along with a lack of experience due to her position in nobility. Her reactions and decisions are real and kept me thoroughly engaged in the story along with her young accomplice Nixy. Those characters, the relationship with Jaron, and Cindra’s dynamic with her mother all makes for a story that is incredibly readable despite the transitions.

If you like fantasy with a different spin, a different type of character, like a teenage girl, this story is definitely worth a read. Even written by a man, the character is authentic and real, the story is riveting and I can’t wait to read the 2nd book.