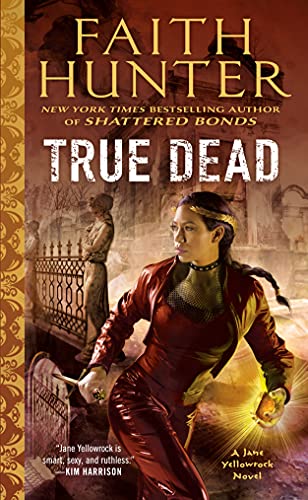 Jane used to hunt vampires, but now she’s their queen. She’s holed up in the mountains with the Yellowrock Clan, enjoying a little peace, when a surprise attack on her people proves that trouble is brewing. Someone is using very old magic to launch a bid for power, and it’s all tied to the place where Jane was first drawn into the world of Leo Pellissier—the city of New Orleans.

Jane is compelled to return to NOLA because someone is trying to destabilize the paranormal world order. And because she now sits near the top of the vampire world, the assault is her problem. She will do what she must to protect what’s hers. Her city. Her people. Her power. Her crown.

One of the things I love the most about Faith Hunter is her ability to summarize previous information so you don’t feel lost.  In the 14th book in the series that becomes critical because even if you’ve read all the previous books, if you’re like me, you don’t remember every last detail. Not only does she summarize but she does so organically within the story and as the information is needed and applicable. It makes the story easier to follow and makes it more enjoyable for those of us who can’t track everything from the prior books.

As for True Dead itself……it is an exhilarating ride of action mixed with intrigue. Not only is Jane struggling with her own shape changing abilities, which she is having issues controlling but she has enemies coming at her left and right. While she quickly deals with one enemy, capturing her in order to obtain information, she soon finds there is an entire network to deal with and manipulations that have been happening since before she was born. The intrigues and action makes for an exciting and easy to read novel, fun and quick paced.

One of the best elements to the plot for me was Jane’s found family, though. Similar to other author’s I like, the character finds friends and family along the way, and adopts them, creating loyalty and a host of secondary characters that you love. I loved the appearance of her real brother and dealing with not only his presence but her grandmother. I also found it heartbreaking as Jane is attempting to protect all her people, which is not always successful.

But as a reader, what is successful is the Faith Hunter’s ability to make you connect with the character’s, care about each individual and root for the good guys, for Jane, as she becomes more than she realized she could be, as she struggles to figure out how to be a queen, to think through problems and not just go out and fight. The flaws in the character, her struggles makes her more human and more relatable while making for a very enjoyable read.

If you like vampires, action, and fun, caring characters, I strongly suggest “True Dead.”  I do recommend reading the series of Jane Yellowrock books first but Faith Hunter does a great job of helping you figure out the story even if it’s been a while between books.  Fantastic read and well worth buying the entire series if you need to.