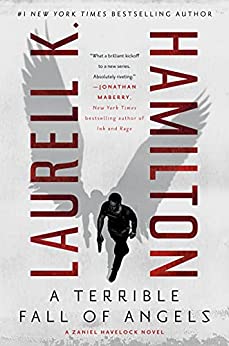 Meet Detective Zaniel Havelock, a man with the special ability to communicate directly with angels. A former trained Angel speaker, he devoted his life to serving both the celestial beings and his fellow humans with his gift, but a terrible betrayal compelled him to leave that life behind. Now he’s a cop who is still working on the side of angels. But where there are angels, there are also demons. There’s no question that there’s evil at work when he’s called in to examine the murder scene of a college student—but is it just the evil that one human being can do to another, or is it something more? When demonic possession is a possibility, even angelic protection can only go so far. The race is on to stop a killer before he finds his next victim, as Zaniel is forced to confront his own very personal demons, and the past he never truly left behind.

The first in a new series from the author of the Anita Blake and Merry Gentry series.

I’ll be the first to say that I have enjoyed the Anita Blake series, despite some of the changes over the years and I loved the Merry Gentry series. So I was really interested to see what Laurell K. Hamilton would do with a new series, especially with a male protagonist.  I found myself intrigued by the world wherein Angels and God exist alongside other alternative religions. The characters are interesting, with lots of mystery and intrigue within the relationships and the main action compelling.

As far as setting up the world, Laurell K. Hamilton does an excellent job. As I said, the world is interesting. Angels and God exist but so do Pagan religions with all magic being real. While not all details are given in this first novel, it does set up most of the world, along with the role of Zaniel and provides his background, to allow the reader to engage with him. I liked some of the concepts, especially that some of how Angels appear is guided by humanity. How and why all of it works I am sure will be explored in future books.

Zaniel is an interesting character, with real world problems, like a separation from his wife and problems always understanding relationships. He also has a friend that’s struggled with being expelled from the Angel Speakers. While overall he is a strong character that can be empathized with, his point of view is occasionally jarring for me. I did find some of his behavior very stereotypical and not always what I would expect from a male point of view. When he’s not focused on women, however, the character is richer and far more interesting. I also wished we’d gotten to see him with his son at some point in the story but the action and plot really didn’t allow for that scenario.

The action was absolutely compelling with the mystery of how the demon was harming his victims part of what made it so intriguing. Zaniel’s path to figuring out what was happening and why kept me engaged in the story. While I have read other stories with Angels and Demons, this did have some new elements, including the ability of the Demon to possess the antagonist so completely. Zaniel’s abilities also seem new and different which made the action even more riveting. I did feel as though there were some loose threads but the main action was resolved by the end of the novel and some of those threads may have been left purposely to allow for the next book in the series.

Overall, I did enjoy the series, despite some of the stereotypical thoughts of the main character occasionally jarring me from the story. I hope some of that improves over time. If you like Laurell K. Hamilton and like supernatural series, this is a new and compelling world with interesting ideas. I will love to see how the author further develops the world and the characters.