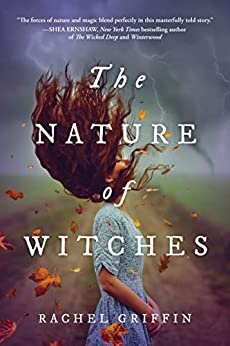 For centuries, witches have maintained the climate, but now their control is faltering as the atmosphere becomes more erratic; the storms, more destructive. All hope lies with Clara, a once-in-a-generation Everwitch whose magic is tied to every season.

In Autumn, Clara wants nothing to do with her power. It’s wild and volatile, and the price of her magic—losing the ones she loves—is too high, despite the need to control the increasingly dangerous weather.

In Winter, the world is on the precipice of disaster. Fires burn, storms rage, and Clara accepts that she’s the only one who can make a difference.

In Spring, she falls for Sang, the witch training her. As her magic grows, so do her feelings, until she’s terrified Sang will be the next one she loses.

In Summer, Clara must choose between her power and her happiness, her duty and the people she loves…before she loses Sang, her magic, and thrusts the world into chaos.

In this young adult novel of magic and witches, Rachel Griffin has done something inventive. She’s created a different viewpoint on how magic works, a fresh spin that revolves around the seasons and around how humans treat our planet. In her world, just like in the real world, the balance of nature is broken, humanity on the cusp of destroying themselves and the world. In this world, witches can make a difference but not enough and with everything hanging by a thread, they look to the only one who might be able to change things, Clara, a witch with the power of all seasons.

Not only is the concept intriguing but the main character, Clara, is engaging. I found myself wrapped up in the story. I also found the other characters likable and interesting as well. It is a story that is interesting, that opens with a problem that is not easily resolved and with a character fraught with flaws who grows along with the solution.  It is a fun read, with a character that doesn’t give up. And while the answer was one that occurred to me well before the ending of the novel, it was still entertaining.

It is emotional, bright and hopeful but if there is one issue, I wondered why the character of Sang isn’t more developed. Most of the characters, while likable, read a bit flat and don’t feel as well developed as they could be but are still engaging. Sang is incredibly likeable, but as the romantic lead in the story, he has very few flaws, so this leaves the romance elements not as emotional as they could be. In addition, as an Asian character, I wanted better development. His character ends up being a stereotype of the wise and smart Asian character, which ends up leaving him far less authentic than the character should be, especially with the current issues in society today. A more flawed character would have been far more interesting and more realistic.

Still, the concepts make for a wonderful story and for a young adult novel, it still has a lot of depth and complexity, especially to the world and the problems plaguing society. Given the hopeful tone it is given, it is the perfect tone for the issues we as a society have.  And I loved the conclusion to this lovely novel.