Here for any of our faithful readers is our May 2022 Book Roundup, jam packed full of fun for readers of the magical and mystical. We have a lot this month so hold on tight while I give you the brief on each one. 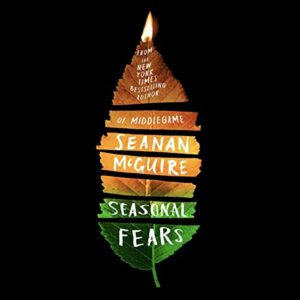 First up, in the first week of May is Seanan McGuire’s Seasonal Fears, the sequel to Middlegame. While it is not a traditional sequel, it does bring us back to that world and many of us have been waiting with bated breath for this book. Here is the description:

Melanie has a destiny, though it isn’t the one everyone assumes it to be. She’s delicate; she’s fragile; she’s dying. Now, truly, is the winter of her soul.

Harry doesn’t want to believe in destiny, because that means accepting the loss of the one person who gives his life meaning, who brings summer to his world.

So, when a new road is laid out in front of them―a road that will lead through untold dangers toward a possible lifetime together―walking down it seems to be the only option.

But others are following behind, with violence in their hearts.

It looks like Destiny has a plan for them, after all…. 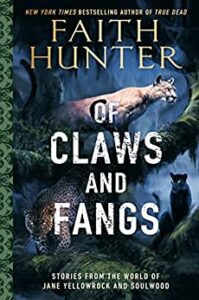 Up next are two anthologies. The first is Of Claws and Fangs: Stories from the World of Jane Yellowrock and Soulwood by Faith Hunter

Collected together for the first time, this volume contains shorter works featuring heroines Jane Yellowrock and Nell Ingram, as well as a host of other characters from the Jane Yellowrock and Soulwood series. Faith Hunter is “an expert at creating worlds filled with intriguing supernatural elements and exciting scenarios”* and her skills are on full display in this collection. From a vampire-filled Halloween evening in New Orleans to the searing tale of how a certain were-leopard first got his spots, this collection has something for everyone, and each story is sure to put the super in supernatural. 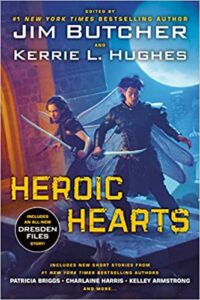 In this short story collection of courage, adventure, and magic, heroes—ordinary people who do the right thing – bravely step forward. 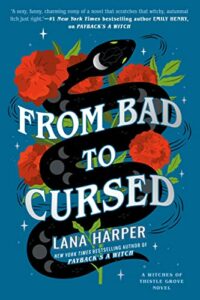 Heading toward the middle of the month, our next review will be From Bad to Cursed by Lana Harper.  In this novel, the second novel in The Witches of Thistle Grove series, we return to hear Isidora Avramov’s story along with Rowan.

Wild child Isidora Avramov is a thrill chaser, adept demon summoner, and—despite the whole sexy-evil-sorceress vibe—also a cuddly animal lover. When she’s not designing costumes and new storylines for the Arcane Emporium’s haunted house, Issa’s nursing a secret, conflicted dream of ditching her family’s witchy business to become an indie fashion designer in her own right.

But when someone starts sabotaging the celebrations leading up to this year’s Beltane festival with dark, dangerous magic, a member of the rival Thorn family gets badly hurt—throwing immediate suspicion on the Avramovs. To clear the Avramov name and step up for her family when they need her the most, Issa agrees to serve as a co-investigator, helping none other than Rowan Thorn get to the bottom of things. 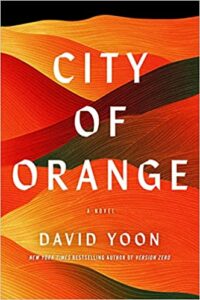 The next author is new to our review pile, City of Orange by David Yoon. The concept is fascinating. Here is the description:

A man wakes up in an unknown landscape, injured and alone.

He used to live in a place called California, but how did he wind up here with a head wound and a bottle of pills in his pocket?

He navigates his surroundings, one rough shape at a time. Here lies a pipe, there a reed that could be carved into a weapon, beyond a city he once lived in.

He could swear his daughter’s name began with a J,but what was it, exactly?

Then he encounters an old man, a crow, and a boy—and realizes that nothing is what he thought it was, neither the present nor the past.

He can’t even recall the features of his own face, and wonders: who am I? 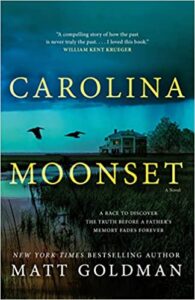 Joey Green has returned to Beaufort, South Carolina, with its palmettos and shrimp boats, to look after his ailing father, who is succumbing to dementia, while his overstressed mother takes a break. Marshall Green’s short-term memory has all but evaporated, but, as if in compensation, his oldest memories are more vivid than ever. His mind keeps slipping backward in time, retreating into long-ago yesterdays of growing up in Beaufort as a boy.

At first, this seems like a blessing of sorts, with the past providing a refuge from a shrinking future, but Joey grows increasingly anxious as his father’s hallucinatory arguments with figures from his youth begin to hint at deadly secrets, scandals, and suspicions long buried and forgotten. Resurfacing from decades past are mysteries that still have the power to shatter lives — and change everything Joey thought he knew.

Especially when a new murder brings the police to his door…. 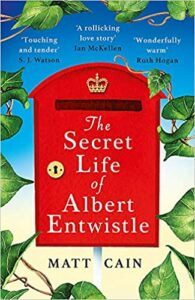 And finally, the end of the month brings a love story for me to review, The Secret Life of Albert Entwistle by Matt Cain

64-year-old Albert Entwistle has been a postie in a quiet town in Northern England for all his life, living alone since the death of his mam 18 years ago. He keeps himself to himself. He always has. But he’s just learned he’ll be forced to retire at his next birthday. With no friends and nothing to look forward to, the lonely future he faces terrifies him. He realises it’s finally time to be honest about who he is. He must learn to ask for what he wants. And he must find the courage to look for the man that, many years ago, he lost – but has never forgotten . . .

Hope you check some of the many books we are featuring this month and read our reviews.

See you among the stacks!