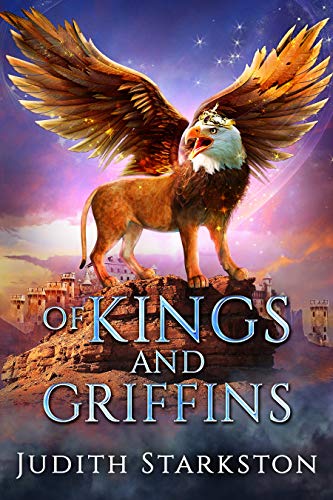 A vicious king, vengeful griffins, and a scheming goddess. Can Tesha outmaneuver foes from these three different worlds?

For Tesha, priestess and queen, happiness is a world she can control, made up of her family and the fractious kingdom she and her husband rule within the Great King’s empire. But now the Great King is dead, and his untried son plots against them. Tesha fights back with forbidden sorcery and savvy. In yet another blow, the griffin king lures Daniti, Tesha’s magical blind sister, into a deadly crisis that Daniti alone can avert.

As danger ensnares everyone Tesha loves, her goddess offers a way out. But can Tesha trust this offer of divine assistance or is it a trap—one that would lead to an unstoppable bloodbath?

When I began reading this novel, I knew I would find it interesting. I love history and I love fantasy. Combining the two is usually the ultimate win for me, especially if done well. And in this novel, Judith Starkston has brilliantly written both the world and the characters of the Hittite Empire. Her characters are wonderfully engaging and her world richly detailed.

The first element you will discover when you begin reading this novel is that despite having two other novels in the series, you won’t feel lost. I recommend those previous novels because the characters and the world are so interesting but this particular novel does work as a stand alone. Then you will dive into her world and you won’t want to come up for breath. The novel is rich in detail and full of depth, dense with flavor and clearly well researched as her world resonates with the time period.

The next element that I loved were her characters. Not only are the female protagonists strong and driven in the novel but their role is most crucial to the plot. Rather than the novel be male driven, despite the time period, Judith has discovered not only wonderful female historical figures to base her story on but her writing has enhanced the role of women within that context. Their powers and their abilities are critical to the successes of their people. But the male figures in the novel are not just cookie cutouts. They are three dimensional and as important to the story as the woman. Even though Tesha is the main protagonist, her husband is integral, they are partners in their endeavors and struggles. Tesha and Hattu are unforgettable.

The magical aspects are woven well into the story. The griffins are magical, powerful, and beautifully written. Tesha’s abilities are written with limitations and dangers to her if she uses them. There are limits to the magic and the sorcery in the novel. No one is all powerful and vying with the Gods comes with risks, including that Tesha might have demands placed on her that she can’t meet. Those limits and those risks make the story more powerful and more compelling.

If you love historical fantasy, this novel is well worth reading. At times it is dense to read but that is due to the beautiful language, the impressive detail, and the wealth of historical knowledge that this novel is built on. The characters are not perfect which makes them even more engaging and warm. The worldbuilding is perfect, a blend of magical and real that works in such harmony you can’t imagine a world without both.

Rating: 5 out of 5 griffins