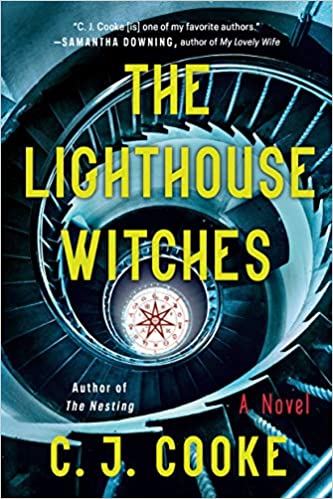 Two sisters go missing on a remote Scottish island. Twenty years later, one is found–but she’s still the same age as when she disappeared. The secrets of witches have reached across the centuries in this chilling Gothic thriller from the author of the acclaimed The Nesting.

When single mother Liv is commissioned to paint a mural in a 100-year-old lighthouse on a remote Scottish island, it’s an opportunity to start over with her three daughters–Luna, Sapphire, and Clover. When two of her daughters go missing, she’s frantic. She learns that the cave beneath the lighthouse was once a prison for women accused of witchcraft. The locals warn her about wildlings, supernatural beings who mimic human children, created by witches for revenge. Liv is told wildlings are dangerous and must be killed.

Twenty-two years later, Luna has been searching for her missing sisters and mother. When she receives a call about her youngest sister, Clover, she’s initially ecstatic. Clover is the sister she remembers–except she’s still seven years old, the age she was when she vanished. Luna is worried Clover is a wildling. Luna has few memories of her time on the island, but she’ll have to return to find the truth of what happened to her family. But she doesn’t realize just how much the truth will change her.

C.J. Cooke has created a masterful novel about witchcraft, family, and time. The story takes place in both the past, 1998 and the present 2021, each adding elements of the overall narrative and arch. Luna’s discoveries add to and enhance the story while the past helps add to the power and emotional arch of the novel.

The characters are engaging, with the emotional elements, the drama of their family adding to the overall narrative. Liv struggles as a mother which most women will relate to while Sapphire’s teenage rebellion is also completely relatable. Luna with the disappearance of her family is perhaps the one I connected with the most, especially as she struggles to make sense of her past and what happened to her family. And all of them interacting with the history of the island, the witches that were killed and their supposed curse makes for a thrilling and spellbinding story, one where the truth is far from expected and where the conclusion is quietly impactful.

Once you begin reading this novel, you will find it impossible to put down as you follow the mystery of what is happening on the island, whether Luna will discover the truth, and whether she will finally know what has happened to her family as she works to create a new family. If you love thrillers, if you love novels that paint witches in an authentic light, one that provides a true history of witch trials, this novel is for you. It is magical, unexpected, and wondrous.

Rating: 5 out of 5 wildlings