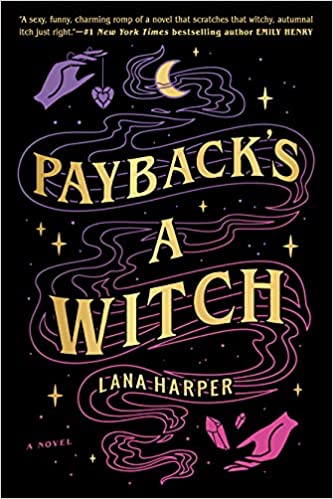 Emmy Harlow is a witch but not a very powerful one—in part because she hasn’t been home to the magical town of Thistle Grove in years. Her self-imposed exile has a lot to do with a complicated family history and a desire to forge her own way in the world, and only the very tiniest bit to do with Gareth Blackmoore, heir to the most powerful magical family in town and casual breaker of hearts and destroyer of dreams.

But when a spellcasting tournament that her family serves as arbiters for approaches, it turns out the pull of tradition (or the truly impressive parental guilt trip that comes with it) is strong enough to bring Emmy back. She’s determined to do her familial duty; spend some quality time with her best friend, Linden Thorn; and get back to her real life in Chicago.

On her first night home, Emmy runs into Talia Avramov—an all-around badass adept in the darker magical arts—who is fresh off a bad breakup . . . with Gareth Blackmoore. Talia had let herself be charmed, only to discover that Gareth was also seeing Linden—unbeknownst to either of them. And now she and Linden want revenge. Only one question stands: Is Emmy in?

But most concerning of all: Why can’t she stop thinking about the terrifyingly competent, devastatingly gorgeous, wickedly charming Talia Avramov?

Lana Harper has shown remarkable skill in taking the standard witch trope and creating a sexy, spellbinding version. It reads like a cross between Halloween Town and Hocus Pocus combined with dynamic female characters that have no need for a man to create a romance. It is a story that is fresh, fun with characters that grow and change and characters that while not perfect still resolve the situation.

Both Emmy and Talia are engaging characters, with sizzling chemistry at least on the page. The secondary characters are just as endearing even the ones that aren’t magical. The other part that makes them so endearing is that the characters’ differ in abilities and strengths but also complement each other well, even while plotting their revenge. And I love that they work out a plan to take their adversary down, not just because he scorned them but because the family is dominating the town and taking over. I also like the descriptions of the magical abilities. They are still recognizable as witches but the magic is kicked up a notch to make it otherworldly.

If you like stories with magic and sexy women, this book should be checked out for sure. The characters are fun, engaging, sexy, and the magic reminds me of a cross between Harry Potter and Hocus Pocus. I enjoyed the story immensely and I think readers will too.

Rating: 5 out of 5 broomsticks