Since Netflix is releasing “The Girl on the Train” on Friday, February 26th, we thought it would be a great idea to release my original review of the movie.  Enjoy and let us know what  you think.

This movie had a lot of hype surrounding it so I was interested in seeing what it was all about. I love mysteries and thrillers so I was hoping this would be an interesting mix. And while I’m not always a fan of psychological thrillers which this was being billed as, my husband is a fan of the genre so I brought him along for additional insights. And he really liked this film. I found the mystery well done myself and I think it was worthy of the buzz.

If you’ve read the book, you probably know more about the story than I did but the film begins with Rachel (Emily Blunt) taking the train back and forth to New York. She is on the train for long periods of time so she has begun watching the landscape go by and has become fixated on one particular couple that lives in her old neighborhood. Why is she no longer living there? The filmmakers quickly let you know that she is no longer living her old life because she is divorced and her husband, Tom (Justin Theroux) has moved on with a new wife and a child.

The film focuses around Rachel and two other women. The first woman is Rachel in a bad place emotionally. You find out she was unable to have children and that she is drinking heavily. She now lives with her best friend, played by Laura Prepon. The second woman is Anna (Rebecca Ferguson), Tom’s current wife who focuses on her child and volunteering. The third woman is Megan Hipwell (Haley Bennett) who is Anna’s nanny and also lives a couple houses away in the same neighborhood. The story weaves back and forth between their viewpoints, allowing the viewer information that would not have been so accessible if only one point of view had been used. 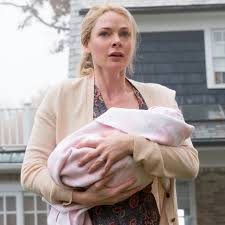 Rachel has the most on screen time and you soon learn that every day as she passes by on her ride into the city, she observes Megan and her husband Scott (Luke Evans). She fantasizes them as the perfect couple, wishing she still had a life like theirs. In the meantime, she tries not to dwell on the life she used to have, struggles with alcoholism and texts her ex-husband. One day, Rachel observes Megan embracing a strange man and it shatters Rachel’s illusions of the couple. She becomes upset and goes drinking. She wakes up the next morning with a hangover, bruises on her and no memories of the night before, only a bad feeling. Then the news reports begin, showing Megan missing and Rachel must discover what happened both to Megan and to herself. 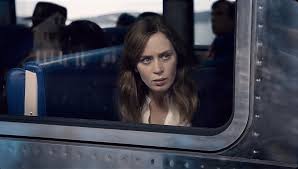 This film is complex and the characters are never quite what you believe them to be. Each of the women could be seen as archetypes, the mother, the young woman, and Rachel as the troubled woman. However, Megan is shown to be unhappy in her life. Her husband wants to have a child but she is troubled by her past and does not want to have any. Anna is plagued by mysterious phone calls and worried about Rachel’s presence in Tom’s life. The writers build the layers of information slowly and thread clues about each woman throughout the film so that by the end, they’ve re-conceptualized each character, changing your view of each woman.

The mystery of the movie, Megan’s disappearance and what happened to Rachel on that emotional night are handled very masterfully. I was kept guessing until close to the reveal. I did figure out part of the answer and who might have been involved but I was immersed enough in the action that I didn’t quite see all of the threads until the end. My husband said that there were only so many ways to make the mystery work but even with that, they still managed to give him some surprises.  It was a subtle, complex story that kept me interested. 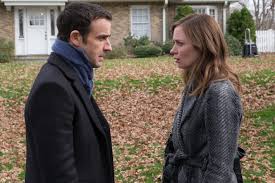 The biggest problem for me was that because it was so plot driven, I felt less of an emotional connection to any of the three women. I like a good story but I have to connect to the characters. Because of the way the mystery was written, with the information spread out over the course of the movie, I had difficulty liking any of the characters at the beginning or connecting to them. It lacked emotional resonance for me and the characters felt flat until the filmmakers begin giving us more about each woman. By the end of the film, I found myself rooting for Rachel and thoroughly caught up in her story.

Emily Blunt was stellar as Rachel, giving you a portrayal that you could believe. She was credible in her self- doubt and questioning, really believing that she wanted to discover the truth of what happened to her.  Justin Theroux provided a subtle performance as her ex-husband, Tom.  Haley Bennett’s role as Megan was crucial to the plot and she did an incredible job as did Rebecca Ferguson as Anna. By the end of the film, each of the women had me involved and caring about them despite my earlier disconnect.

The action during the film is taut and intense. The acting was excellent and the characters well built. If you like mysteries and a slow unfolding story, you will enjoy this psychological thriller.  It is well acted and there are enough twists that viewers will be kept in suspense until the very end of the movie.